87 divers speaking up in the name of 70 million sharks
on the first SILENCE OF THE SHARKS protest dive in Eilat, Israel
Eilat, December 18th, 2015, sharks of the world were provided with a voice. 87 dedicated divers holding protest posters and escorted by a 2-meter high shark statue, carried out the opening dive of the SILENCE OF THE SHARKS campaign at the Satil wreck in Eilat, Israel.
SILENCE OF THE SHARKS is a global underwater campaign against shark hunting, initiated by producer David Pilosof in cooperation with shark conservation organizations worldwide. The campaign is composed of a series of mass dives held in many different countries around the world. Each dive is an underwater protest hosting tens or hundreds of divers equipped with waterproof banners and speaking up in the name of sharks. These dives are documented professionally and covered by local and international media in attempt of raising public consciousness, which will eventually and hopefully translate into action. 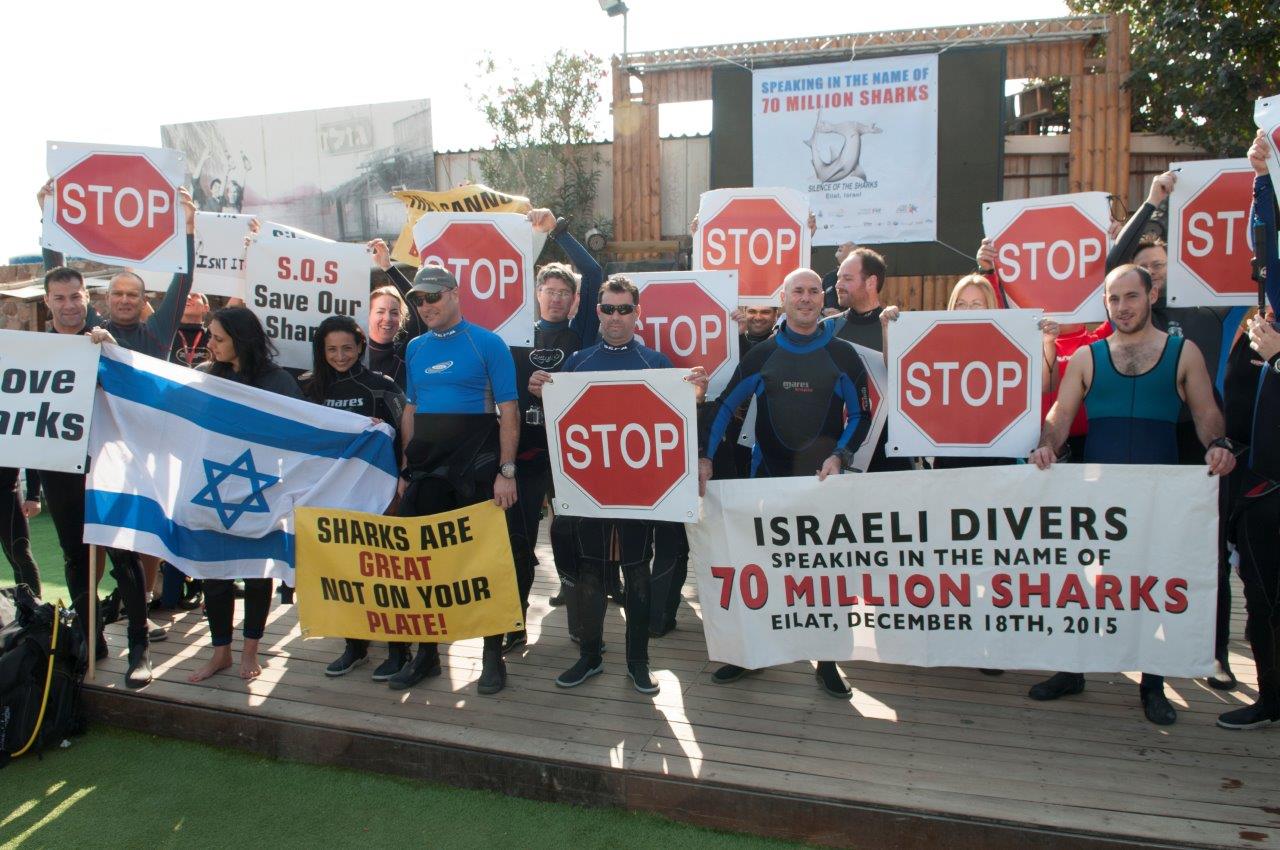 Image: Razi Livnat
The official opening dive of the campaign was successfully carried out in Eilat. Since 87 divers participated at the dive, the logistical operation was quite complicated and challenging. Nir Avni, one of leading professionals in the Israeli diving industry, directed the dive and had it all well planned ahead. Divers were divided into groups of 10 and each group was led by an experienced diving instructor. A detailed briefing was followed by a live dry rehearsal, ensuring that each diver is familiar with his or her role underwater. A festive ceremony was then held, announcing the official opening of the campaign, after which divers began to gear up and head out into the water.
During the ceremony, a 2-meter high statue of the project's logo, created by artist Shlomo Cohen and printed by Massivit 3D Printing Technologies, was introduced on stage. As soon as the ceremony concluded, a group of divers lifted the shark and carried it into the water. During the dive, the begging-shark statue served as the anchor of all divers. 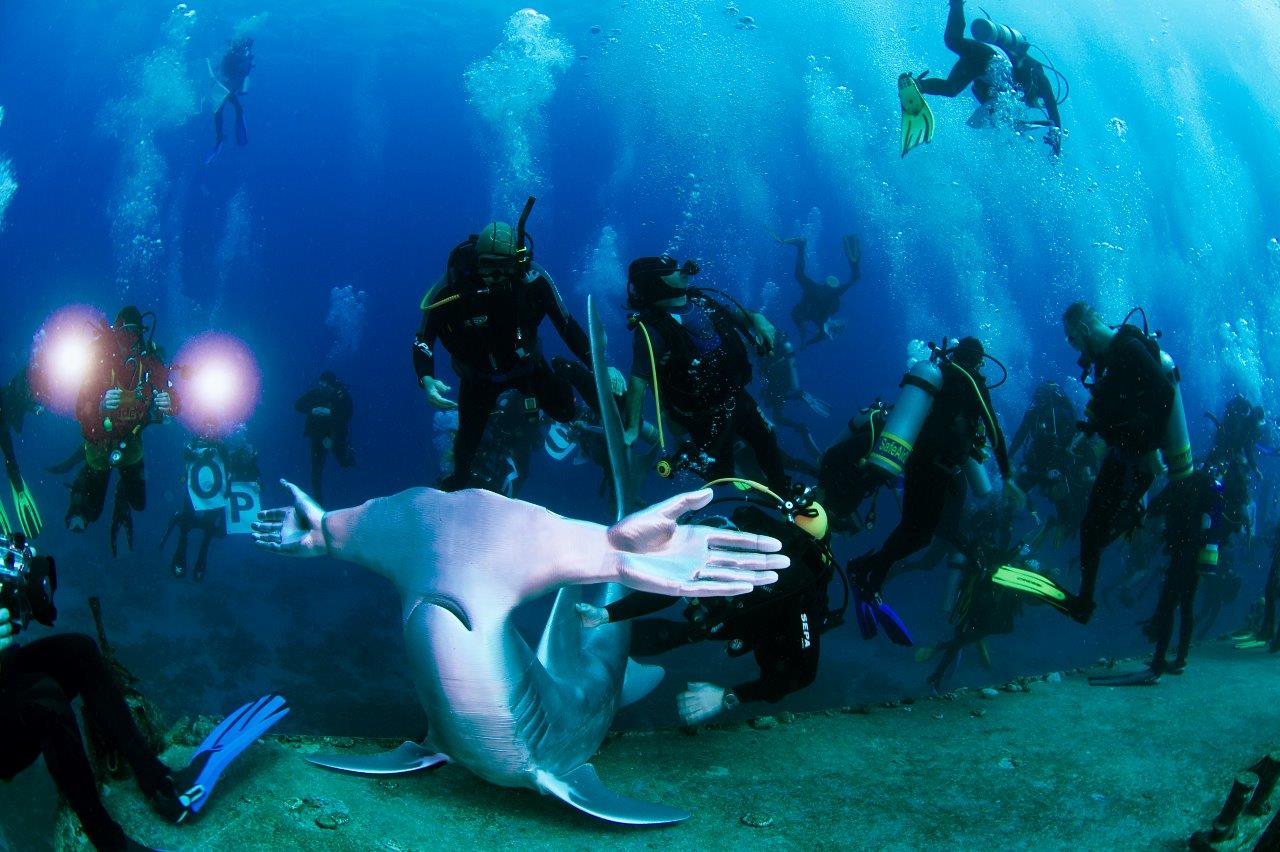 Image: Mike Fuller
The first SILENCE OF THE SHARKS dive has concluded. Similar underwater protests will follow in many countries during the following year, providing sharks with the loudest voice throughout the most silent protest.
Israeli delegations have begun carrying out protest dives in exotic dive sites, such as Cuba and Cocos Islands. Additional dives have already been announced by other countries. For instance, the Sardine Run in South Africa will be hosting divers speaking up in the name of sharks just as they have their best feast in the background. Please consider this as an official invitation to join the dive on June 4th, 2016.
The final “D-Dive” and the largest underwater protest will be held in October 22, 2017, hosting more than 500 divers from all over the world at the Mediterranean Sea and will be live broadcasted using an innovative, sophisticated and challenging technological operation. 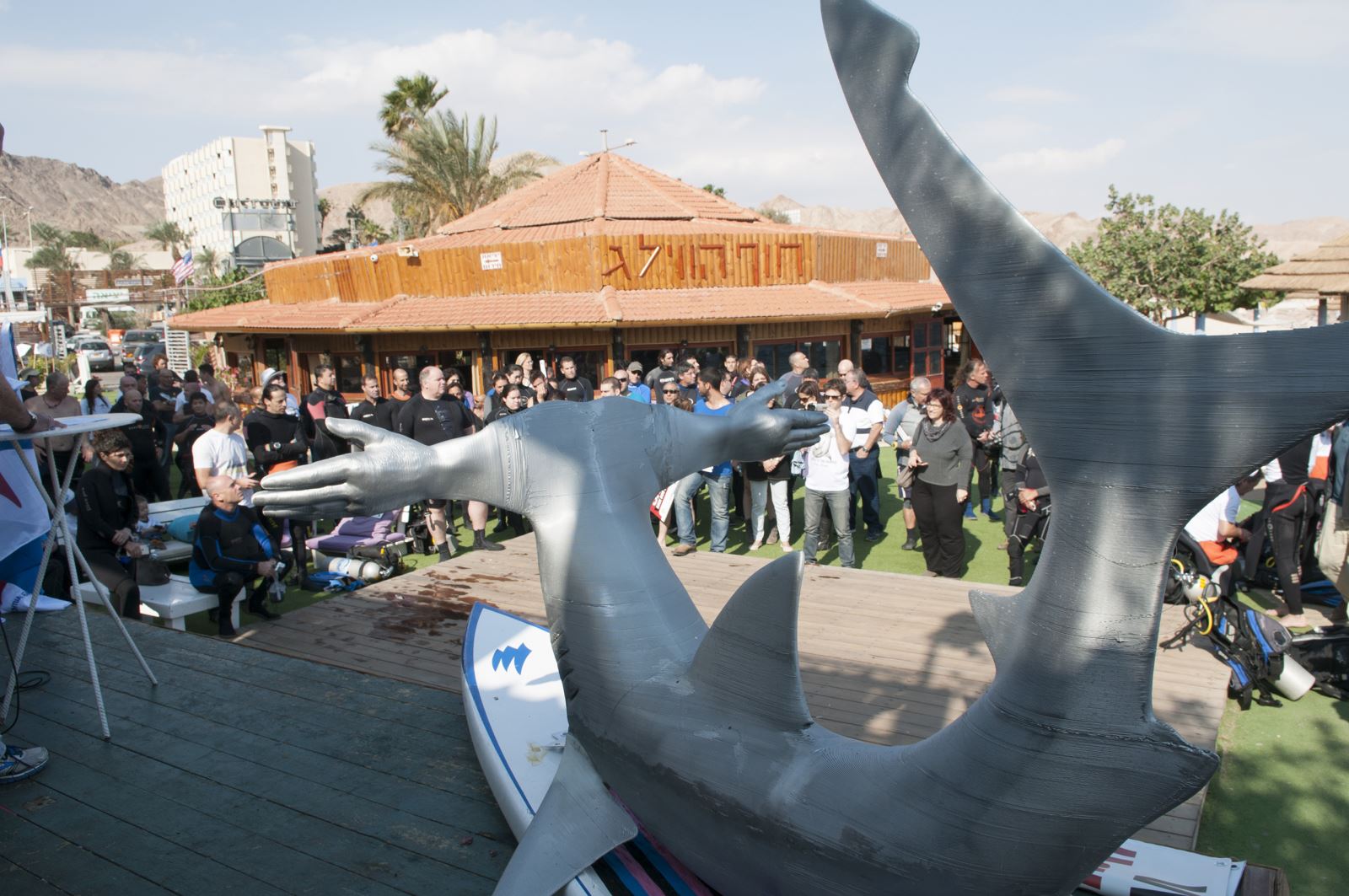 Image: Razi Livnat
This abuse must be detained at once. I hereby call out to all divers worldwide to join us on this campaign. Follow us on Facebook, join the organized SILENCE OF THE SHARKS campaign and initiate more dives on your own."
“70 million sharks are hunted every year all over the world”, he summarizes. “They cannot speak. But we can. And now, we finally are."

Back to the main gallery page